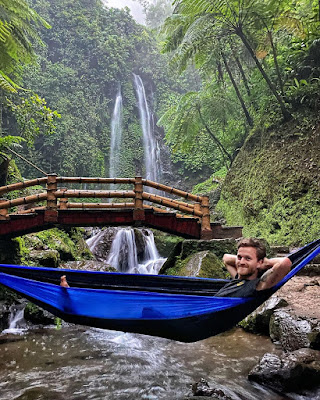 Down one hundred and sixteen steps become a challenge when you arrive at an excursion area in Karanganyar, Central Java. But, you will not feel tired if you see the panorama that is served throughout the trip. 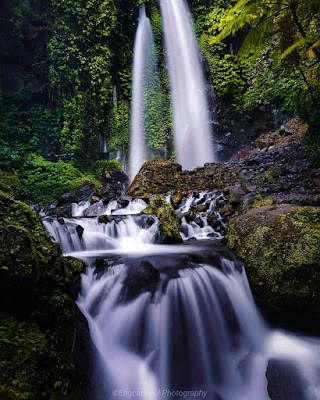 This tourism object is located in Karanganyar Regency, precisely in Berjo Village, Ngargoyoso District. Around 41 kilometers from Solo.

The cool air and the shady trees surrounding the area will make visitors not too hot when going downstairs made of cement because of the shade of fern trees attached to the cliff.

Indeed, after climbing the stairs, you do not immediately find the location of the Jumog waterfall.

You still have to walk about 100 meters to find it behind a cliff. But, the cool atmosphere and refreshing green panorama will not make you bored.

"It's true the word friends, waterfall and the atmosphere of the place is quite charming. The road to here is also not difficult, "said Eka Rahayu (19), a Polytechnic student in Madiun.

Dara from Magetan, East Java, is willing to reach a trip of more than 2 hours using a motorcycle to look at Jumog waterfall. Previously, he only looked at the photos exhibited by his friends.

Jumog Waterfall was dubbed the Sirna. Because, before it was officially opened to the ordinary in 2004, this location was covered with shrubs.

As a result, residents and the Village Government (Pemdes) Berjo worked together to clear the bush and open the road so that this waterfall can be seen as normal.

The high waterfall is only about 30 meters. The water discharge is not too large even though it rains. Also, not too little when the dry season comes.

The water is clear, it is not surprising that many visitors enjoy playing and soaking their feet in the river waterfall.

In front of the waterfall, Berjo Village General Board as the manager has provided a bridge. This spot is a favorite location for visitors who want to take pictures with the background of the waterfall.

The manager also provides wooden chairs that can be used by visitors to unwind when in this sightseeing area.

Other facilities provided by the manager also exist in the form of a game for little ones like seesaw, swing, climbing ball, swimming pool, but not with a spilled bucket.

If you don't bring lunch, you don't need to worry about hunger. There is a range of stalls on the edge of a tributary that offers a variety of menus, ranging from instant noodles, rabbit satay or chicken satay.

Rows of kiosks can also be found on the track before the ticket window. They not only offer food but also souvenirs from surrounding communities. For example, cassava crackers and teas of various flavors.

The entrance ticket is only valued at 5,000 rupiahs per person. You who bring a private vehicle can park motorcycles or 4 wheels in the area that has been prepared by the manager. The parking fee for motorbikes is only 2,000 while the wheels are 5,000.


If you want to go to this tourist spot in Solo, it's not too difficult because the road access is good enough, although uphill but not too high. 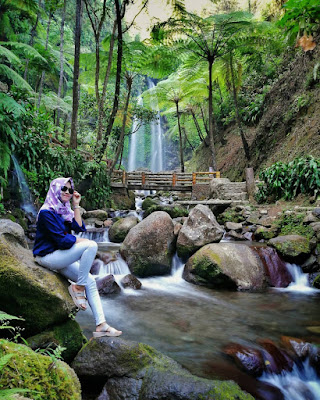 If the tour starts in the city of Solo, you must go to the east. When you get to Karangpandan, you won't have any difficulties because there is already a road sign.

The spot position is on the slopes of Mount Lawu in the Karanganyar district. The easiest route is to follow Jalan Tawangmangu then head to the pertigan to the Jumog sightseeing road - Sukuh Temple - Kemuning - Cetho Temple.

The position of a small T-junction is found before approaching the Tawangmangu Nature Sightseeing area. From the sightseeing gate, only 2 km away by taking the right path along a fairly narrow asphalt path.

For public transport users, you can take a bus from Solo to Karangpandan terminal (direction to Tawangmangu) at a cost of 5,000 rupiahs per person.

Then proceed by taking a small bus to Nglorog (Sukuh Temple or Curug Jumog) or to the Kemuning terminal (Cetho Temple) at a cost of 2000 rupiah per person.

Furthermore, riding motorcycles, because there is no public transportation to the temple or waterfall. It costs around 50,000 rupiahs round trip, but can still be negotiated.

From the direction of the vehicle parking area, you are required to walk about 400 meters away. Bypassing through the path in the form of a descending staircase made of cement.

Fatigue due to a trip that spent a lot of time will pay off with the sights offered by this tourist spot.

The Origins of Myth

Bridal Waterfall is a name given by local residents. The reason why it is named so because there are 2 numbers and are in 1 same area and close together.

According to local residents, this place used to be called Grojokan Jumog or Dugji. Grojokan is the Javanese designation of water falling down.

But because this waterfall is divided into two components, finally the tourist location is named Bride Waterfall.

For those of you who are still dating and want to get married can visit the area so that you are getting closer to marriage.

And for those of you who are married will be more intimate and harmonious in married life.

While for those who want to find a mate, they can refresh their views here. But it is only a myth because there are already arranged marriages mate.

The origin of the name of the bridal waterfall itself is taken from the unique form of a pair of curug side by side like a pair of newlyweds.

The surrounding community believes that if there are a pair of young people who are still dating then visit the location, then soon their relationship will go to the stage of marriage.

While for those who are married, their household relations will become more harmonious after visiting the waterfall which has a height of about 12 meters.

There is no mystical story like in a horror film because the Curug Bride is still relatively new and endorsed in 2011.

Amenities
The facilities provided by this tourist attraction can be said to be quite satisfying even though it is not as complete as a popular place, but it is quite well maintained and clean.

At the tourist site, there is a small mosque and parking area, although not big enough, the cleanliness is maintained and the atmosphere is so comfortable.

Not only that, but in this tourist area there is also a swimming pool dedicated to the little baby under the age of seven with the aim that they can play water safely and comfortably.

This swimming pool has a depth of 50 cm, so it is safe for the baby. No need to pay entrance fees again to swim here, because the entrance ticket already includes the use of facilities.

For those of you who want to stay do not need to worry, because around the area there is a homestay-style place to stay, the distance is around 1 KM from the tourist attractions.

To stay overnight just pay rent starting from 50,000-250,000. If you are tired after playing water and walking, you can relax for a moment in the mini-gazebo around the waterfall. 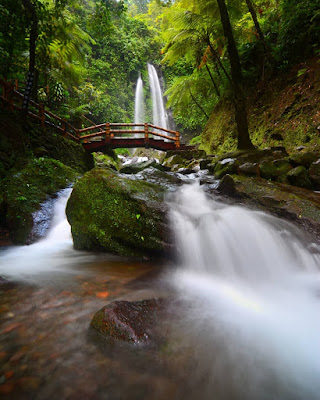 And if you do not bring food or drinks, at the tourist sites there are already available places to eat with a variety of menus such as rabbit satay, one of the typical menus of the Tawangmangu region.

There are also chicken satay and various menus of hot drinks and other foods. In that place, there are also special pathways that can be used for reflexology for the feet.

The path that has been fitted with gravel is a round shape and neatly arranged lengthy and good to use without using footwear.

This waterfall is known as "Grojogan Sewu" by the local people. But outsiders are more familiar with the name Curug Tawangmangu. The altitude is 80 meters above sea level and is the highest waterfall in Central Java.

To go to this spot, visitors must climb the stairs numbering more or less than 1000. No need to worry, because along the climb you will be treated to enchanting views, trees and the chirping of a busy bird.

There are so many monkeys in the Grojogan Sewu area. Although tame, visitors still need to be careful, especially when feeding monkeys. This animal is an animal that is protected by the government.

Upon arrival at the location, you can feel the freshness under the overflow of waterfalls or play in the pool rides provided by the management.

For visitors who want to spend the night, a homestay has been provided as a place to stay. The rent is relatively cheap and is suitable for many people to fill.

Curug Parang Ijo is another waterfall around Mount Lawu. The name is indeed less familiar when compared to 2 other waterfalls such as Grojogan Sewu and Jumog. But, the atmosphere there can be pitted.

Parang Ijo Waterfall which has a height of about 50 meters is located in the village of Girimulyo, Ngargoyoso sub-district.

It is located not too far from Sukuh Temple, Cetho Temple, Jumog Waterfall, and Kemuning Tea Plantation. Parang Ijo is located at an altitude of about 1,000 meters above sea level.

In this tourist spot, there are already various facilities to pamper travelers like swimming pool, viewing post, flying fox, to a playground.

This temple is classified as a Hindu religious heritage because it is found a place of worship of the phallus and yoni.

This temple is considered controversial because its form is less common and describes the genitals of the human genitals. However, Sukuh Temple has been designated by UNESCO as a World Heritage since 1995.

The site of the Sukuh temple was first discovered during the reign of Great Britain in the land of Java in 1815 by Johnson, Resident of Surakarta.

Johnson was then assigned by Thomas Stanford Raffles to collect data to write his book The History of Java.

After the reign of Great Britain passed, in 1842, Van der Vlis, a Dutch archeologist, carried out the research. The first restoration was carried out in 1928.

The Sukuh temple building gives a striking simplicity to the visitors, different from the large temples in Central Java such as Borobudur and Prambanan.

The Sukuh temple's shape is similar to the Mayan customs in Mexico or the Incas in Peru.

This structure also reminds visitors of the shape of a pyramid in Egypt. This impression of simplicity caught the attention of the well-known Dutch archeologist, W.F. Stutterheim, in 1930.

He tried to explain it by giving 3 arguments. First, it is likely that the sculptor of Sukuh Temple was not a mason but a carpenter from the village and not from the palace.

Second, the temple was created in a bit of a hurry so it is not neat. Third, the Majapahit political situation at that time experienced a collapse which made the building not large and magnificent.
Facebook Twitter