Introduction to What is the diaphragmatic valve

ShownPlate
Sunday, February 26, 2017
Facebook Twitter
Basically, the diaphragm valve has the same function as other types of valves, namely to regulate the flow of fluid or gas in an industrial piping system, but this diaphragm-type valve has advantages, including a calm flow and the fluid will flow without obstacles.

The diagonal valve can be controlled by different types of actuators such as manual, pneumatic, hydraulic, electric, etc.

In general, the type of pneumatic actuator that is most widely used in the use of the diagonal valve because it is faster and more efficient than the use of hydraulics or electrics. However, manual operation and hydraulics are still widely used, especially in industrial process systems that do not require speed for open-close (open-close).


The main structure of the elements of the valve diaphragm is the body, the cap (chimney cover) and the flexible diaphragm. The diaphragm valve is easily recognizable in its convex shape just below the handle.

In general, there are two types of diaphragm valve, namely: 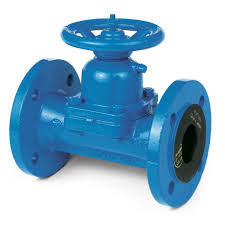 The direct passage type has the same internal diameter and the same shape as a duct. To operate this type of valve, a long stroke is required. 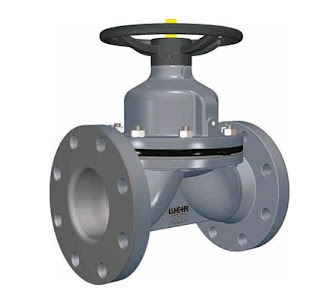 Weir-type valves or dams are very good for throttling and sealing. To operate this type of valve, a short stroke is sufficient.

The diaphragm valve stem does not rotate. The diaphragm moves up and down using compression of the piston which, in other turns, is driven by a lever arm or a rod operation. Usually, this valve does not have an envelope or a veil, which facilitates selection. However, for hazardous chemicals, the caps are supplied and sealed with Teflon or another packaging.

The diaphragm valve is made from materials which include: cast iron, soft iron, mild steel, stainless steel and a mixture of corrosion-resistant materials.


1 It can be used as an all-or-nothing service valve.

2 Resistant to chemicals because several layers are available.

3 Rod leakage can be eliminated.

5 It does not have a sediment trap bag, so it is suitable for mud and viscous liquids.

6 This valve is ideal for hazardous chemicals and radioactive liquids.

7 These valves do not allow contamination of fluids, so they are widely used in food processing, pharmaceuticals, brewing and other applications that do not tolerate contamination.


1 weir (weir) can prevent complete drainage on the pipe.

2 The working temperature and pressure are limited by the material of the membrane. Generally, the pressure is limited to 200 psi (1380 kPa) and the temperature to 400 F (204 C).

4 Diaphragms can be eroded when widely used in throttling services that contain a lot of impurities.

A typical application of diaphragm valves